Catch me on ‪#‎MyAddictionisReading‬ tour any time during the week. I'll post stops along the way.

Set against the backdrop of modern ‪#‎Dublin‬ newspapers, #GoingAgainstType is the sparkling story of 2 rival columnists who unknowingly fall for their arch enemy: each other.
Here's a quick EXCERPT: 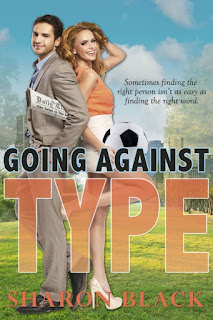 Charlotte smiled nervously as Fiona fussed around her.
'How many people are you having?' she whispered.
'Oh there's ten of us altogether. You'll love them. I've put you sitting next to a friend of Jack's. Actually, you might know him, he's a journalist but not a sports writer. Come in and I'll make the introductions.'
Great, she is matchmaking. Charlotte sighed inwardly as Fiona led her to a tall, dark haired man who stood with his back to them, chatting to the three other women in the room. They seemed to be mesmerized.
The man turned as he heard Fiona. Oh good grief, Charlotte thought. It's Panama Hat Man. She found herself blushing as Fiona steered her into the man's line of vision.
A slow, amused smile of recognition spread across his face. Brown eyes locked hard with green. Okay Charlotte, play it cool. With a show of dignity, she looked away.
***************************************************