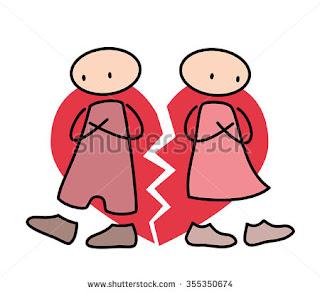 'HE BROKE it off with her on FACEBOOK!' The middle child bites viciously into her peanut butter on toast, indignant for her best friend.
'That's terrible,' I say. 'But they're only 17 and they were only dating a few weeks.'
'What's that got to do with anything? She'd changed her Facebook status to In a Relationship, with a picture of the two of them. Now she has to change it back. It's mortifying.'
I fight to keep a straight face.
'Ah yeah, no, that's terrible,' I say again.
'He could have at least picked up the phone to ring her. Who breaks it off in a Facebook message?'
Your generation, I think, then stop myself. Social media may have transformed the way we meet and date - but it's not just teenagers who are guilty of its misuse.
A good friend of mine is coming through an awful breakup. She came home from work early, nose and eyes streaming, shivering with the onset of flu. Half an hour later, her boyfriend texted.
Hey, how r u feeling?
Lousy. Got the flu, she texted back.
Oh, this prob not gr8 time then, but I'm breaking up. Have a nice life.
After a few minutes, he added, Feel better soon.
She didn't ask whether this last bit referred to her illness or the breakup. When she went on Facebook later that night, she saw he'd already changed his status to single - hours before he sent her the text!
Of course, before Facebook, Instagram, or mobile phones, breakups were just as bad. Only then, you had to confront the person. Worse, you had to remain in one piece, if you were the one being confronted.
'Er, I don't think we're compatible,' I remember stuttering at 17, to a bewildered boy of the same age.
'How would you know?' said he. 'Ever since I asked you out, I've hardly seen you.' This was technically true. I'd been avoiding the poor guy, as I'd tried to scrape together the courage to break it off.
But at least breaking up face to face, requires a bit of thought. And backbone. And usually empathy.
Which, dare I say, might be a tad in short supply when life, good, bad and sometimes hurtful, is a Facebook Post.
Meanwhile, the middle child is still amazed that any boy wouldn't want to date her best friend FOREVER.
'He seemed so sweet,' she says. 'They were such a cute couple.'
When you're a teenager, everyone is sweet, all couples are cute - and a long relationship is six weeks.
I take comfort in the fact that however little she learns about love right now, she is undoubtedly learning about loyalty.
Her friend is lucky to have her.
*************************************
Last Day #Amazon #Sale for Going Against Type, as part of #Tirgearr Anniversary Celebrations.
Amazon USA    99c
Amazon UK      99p
To find out more about my contemporary Irish romantic comedy, visit my Going Against Type page in the top right panel on this blog.
**********************************************************

Have a wonderful week,
Thanks for reading,
Hugs & xx,
Sharon.