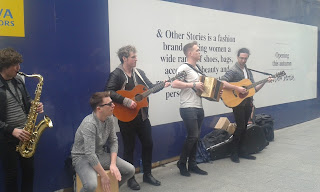 THE BOY couldn't wait for Easter Sunday to arrive, before looting the cupboards for his chocolate eggs.
'Don't even think about taking any of my Easter egg,' one of his sisters says. 'I know exactly how much is left.'
'Eggs-actly' he says, laughing at his own joke.
'These are the yolks, folks,' quips his other sister.
Could it get any worse?
Easter 2016 in Ireland, marks the hundredth anniversary of The Easter Rising, and the commemorations are part of a year long remembrance of that event. The Easter Parade through Dublin yesterday was the biggest we have ever staged in this country. The Rising's anniversary was also marked by Irish groups all over the world.
I won't turn this blog into a history lesson. For anyone who doesn't know about the 1916 Easter Rising, look it up. But take my word, when I say it was seminal.
On Saturday, The Husband, The Middle Child, The Boy and I go to a lunchtime play in Dublin's beautiful Georgian, Powerscourt Town House Centre.
Based on actual events, 'Rebel Rebel' centres on two 1916 Dublin actors, who abandon their matinee of WB Yeats' Cathleen Ní Houlihan, take guns hidden beneath the stage, and leave to be part of the Rebellion. The whole play takes just under an hour, and the audience is invited to participate in this fierce, amazing little production.
Afterwards, we wander down Grafton Street, where young Irish band Seo Linn (pronounced Shaw Linn) are gigging, singing half in Irish, half in English, as is their way.
Later, at home, The Husband browses the 1916 Souvenir Edition of The Irish Times. The headline from that newspaper reads The Darkest Week in the History of Dublin: An Orgie of Fire and Slaughter. The last paragraph includes the following: "Looting was extensively practised on Monday. The 'underworld' of the city...first tackled the shops in Lower Sackville street...hordes of hooligans crowded into the shops, returning with bundles of wearing apparel....Nobletts, at the corner of Earl street, and Lemons, in Lower Sackville street, were tit-bits for the younger section of the roughs, who made merry with boxes of chocolates..." *
The Boy can relate to the last bit. The rest of us can walk through O'Connell Street (formerly Sackville Street) today, and try to imagine what Easter Monday was like. The Rising itself, the confusion about orders given, withdrawn, reissued; the terrible loss of life on both sides...the aftermath.
In one of Yeats' poems, he spoke of his play Cathleen Ní Houlihan, when he wrote, Did that play of mine send out certain men the English shot?
It's good to remember, debate, argue, and cast our democratic vote. It's good when everyone gets a hearing.
No country or constitution or democracy is perfect. But it's now 100 years since The Rising. And that allows us some distance.
A Peaceful and Happy Easter, everyone.

Next Monday, April 4, fellow Tirgearr author David O'Brien, will be guest blogging.
I'll be back the following Monday, April 11, 7.30GMT, with my fortnightly, personal column.

Have a wonderful week,
Thanks for reading,
Hugs & xx,
Sharon.
Posted by Sharon Black, Writer at 07:30