SEASONS OF MISTS AND DREADED FRUITFULNESS 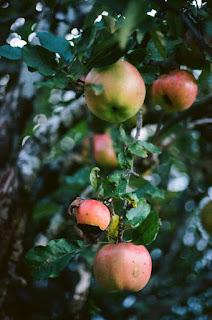 THE OLD APPLE TREE in our little garden fruited early this year. Early and generously. The boughs are literally dropping to the ground with the weight of the apples. And also because the tree hasn't been pruned in 10 years. In fact, the branches are so low, I have to remember to duck when I'm cutting the grass. But I digress.

Where was I? The apples: slightly sharp, green and blush in colour. They started appearing sometime during the late Summer although I can't remember precisely when. But we started picking them in early August. Each day since, the apples have grown and ripened. As I write, we have three massive bowlfuls on the kitchen counter.

The only reason I dutifully fill these bowls with as many apples as I can reach, and even check the grass daily for perfect (non-wormy, non-bird-eaten) windfall, is because of a deep-rooted guilt. Imagine the absolute WASTE if I left them to fall and rot, or stay on the tree and rot, or whatever they'd do if we didn't collect them.

A part of me - and I HATE myself for having to admit this - absolutely wishes our apple tree wasn't quite so bountiful. I know that's probably a sin or something. At the very least, a crime against nature. Even if it's all in my mind.

But every time I haul out the ladder to unburden the branches, I wonder what on earth I'm going to do with all this fruit. I've offered it to a few family members, of course. They've turned me down. There's various reasons for that, and I won't take it personally. One person likes a certain type of apple, and sources it from a particular shop. Another doesn't eat apples.

I had considered offering the apples to some of the neighbours, but because our houses were all built in the early 1930s, on land formerly owned by a large estate, lots of people have similar trees in their gardens, which were once all part of the same orchard.

'Make compot', one of my brothers suggested. Excellent idea, I thought, as I wondered which of my offspring I could persuade to peel and slice all those apples into a pot. Then I wondered how much room I'd have in my freezer for it.

And I wondered too if I'd use it. Or if, in six months' time when I suddenly needed the room in my freezer for another packet of frozen peas (which I actually use), would I be tempted to throw it out?

I just said tempted, OK? I'm not saying for one minute that it's a certainty. Just, I need to figure out if it's worth all the fuss. Because the thing is, I'm not terribly interested in baking. Unlike loads of people I know, it doesn't relax me. In fact, it tends to make me quite stressed. All that weighing and rolling and folding. It's like pilates, only with weight gain rather than weight loss at the end.

Also, and this is an important factor, with the exception of the men in our family (all two of them), nobody eats crumbles or tarts. And the only time I eat stewed apple, is if I make a small amount of compot to accompany pork. None of the rest of my family is interested in baking with apples, either. If, on the other hand, we had a tree that produced chocolate chips, it would spark a small land war.

Meanwhile, the four tomato plants that we threw down in hastily assembled compost trays on the patio, are ripening at a pace I can manage. Tomatoes don't trigger the same love/hate feelings in our kitchen. They're a lot more versatile. And when we have a glut (which has happened), there's always lasagne.

Nor does it matter that we don't grow them from seed. When I pluck those tomatos off the vine and throw them into a salad, I am, in my own head SINGLE-HANDEDLY SAVING THE PLANET.

Which isn't an admission of smugness. Because obviously, I understand that I am completely deluded. That said, if I ever manage to grow a full, fruiting tomato plant FROM SEED, I will be unbearably smug. You have been warned.

Which brings me back to my feelings of guilt about the apple tree. It has stood in our garden for who knows how long? It is older than our house. I imagine the people who lived here decades ago, and their delight every Autumn when the apple tree fruited. They'd probably prepare to store some of the apples for the winter, and turn the rest into tarts and crumbles and apple jam. No doubt there'd be whole days set aside for jam making.

When we first moved to our home over 25 years ago, I loved that we had an apple tree in the garden. In my mind, our children and I would count down the days until we could pick the apples. Together, we would make our crumbles and our own secret-recipe jam. It was probably in the same fantasy as planting our whole front lawn as a wildflower garden and growing so many vegetables in the back, that I'd never have to buy any.

In the end, reader, I managed the wildflower garden. I'll have to be content with one out of three. If anyone who knows me personally, happens to be reading this and fancies some organic apples, let me know.

Please drop your comments you in the box below on this week's blog. (Comments are moderated, so they won't appear immediately! Your email address won't appear at all. 💚)
Please share today's column and thank you so much for reading, I appreciate it MASSIVELY.

To get THIS FUNNY IRISH LIFE FREE via email every month, go to the Follow by Email box at the top right of the page. Your email address will NEVER be shared or misused.

To find out more about me, click on the links/information at the sidebar on the right.
Sharon. xx

Posted by Sharon Black, Writer at 07:30 No comments: